On the front cover was an inconspicuous Indian man dressed in robes. The book basically explained his spiritual life. On reading I encountered for the first time phrases such as eternal bliss and transcending consciousness. He talked of walking the path of God, finding your true self and questioning the nature of existence and more importantly he could levitate. Yogis proficient enough could actually levitate, that’s right, fly. This man sounded like he had been on a trip but no drugs were involved. I was hooked. My utterly bored and directionless mind now had something to replace the nightly television soap series my parents were addicted to. I had found my new drug and its name was Spirituality. Spirituality these days encompasses so many things – alternative therapies, esoteric teachings, the World’s religions – all offering different ways to a different kind of God. For a price of course. I didn’t have a clue where to start but seeing as I was the type of person who liked to pick the icing from the cake before I ate the cake itself. I thought I would go straight for the jugular and try and induce some of these experiences he talked about in the book. The internet seemed a good place to start. It was said that the Internet would hopefully spread knowledge throughout the world and raise the consciousness of humanity but research found that the most popular searches were websites related to satanic porn and David Hasselhoff with funny hamsters coming a close third. Humanity clearly had a different goal. Rather than be distracted by the Internet I did an old-fashioned thing and headed to the local bookstore. I wandered over to the Mind, Body and Spirit section of the bookstore. That’s Mind, Body and Spirit to the uninitiated. There was a plethora of spiritual books on display. There I found all manner of books from the Dalai Lama’s latest teachings to hypnotherapy books on How to Create a Richer You in 24 hrs and The Law of Attraction. The attraction being that you could just think yourself successful. I was thinking of sending a few of those ‘law’ books to the poorest areas of Africa and seeing how they managed. I also managed to find some ‘mind wave’ goggles made in California. These were Terminator-style sunglasses that had flashing lights fitted inside and headphones attached to a small sound box which would emit bleeps of a high order thus inducing your brain into the alpha state. A state of mind normally reserved for Tibetan yogis, or college kid dropouts high on dope. These mind wave goggles could raise your consciousness from mild stoned hippy to Buddhist style enlightenment in about forty-five minutes. Forget years in a cave. I grabbed a stack of books and the glasses too and headed home. Read The Rest Of My Thrilling Memoirs ; ) 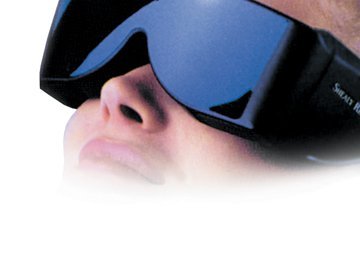