If you want to talk about fashion then you should have talked to me during the nineties. It’s not that I was fashionable but after taking so many drugs it didn’t matter what I wore. I was convinced of my own greatness. Every time another clubber looked at me with that, ‘Where the fuck are you from look?’ I took it as a confirmation of my undeniable greatness. I wore a tall orange hat. A white T-shirt with the obligatory round yellow face replete with smile, and a pair of tartan trousers. My fashion taste buds had been completely numbed by amphetamines.

‘You looked wicked mate,’ said the girl as she clung onto my shoulders in a kind of semi-hug trying to stop herself from collapsing. I grabbed her shoulders to hold her up and somehow we both managed to keep each other from falling over. Despite the great music pounding through our bodies we had become overwhelmed with the emotional side of the experience. When I first discovered ecstasy it was like being the me I wished to be. My first pill was a revelation and I was able to experience the kind of mystical states that spiritual books talked about. Unfortunately for me the drugs propped up a weak personality that suffered from social anxiety. While others were able to moderate I could not stop. Always wanting to get back up to the peak as soon as it dropped. 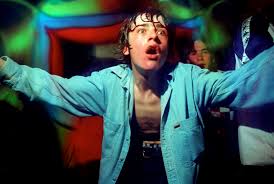 ‘What have you had?’ she asked.

‘I’ve had two Mitsubishis. A Dove, and half a Strawberry.’ We both jogged lightly on the spot like two people who had just came to the end of a marathon. This was the nineties. This was ecstasy. It wasn’t about freedom and liberation. It was about numbing the mind and annihilation. It totally blocked out everyday reality so that for a few minutes we could believe that heaven on earth truly existed. My sister grabbed me around the shoulder and offered me a big loving hug. All three of us nodded together while laser lights and the deep bass vibrated throughout the room. We joined arms with the rest of the ravers around us. We were three thousand people all completely off our heads on drugs jumping up and down like complete lunatics. We were not of this world but living in a world of our own.

It was hard to see how I could go from these positive vibes to the dark and dingy experiences of my last days. I had gone from happy house to hard-core trance. From a Friday night out with my friends to a Sunday day-time clubbing with strangers I didn’t really know. I was in a squalid flat somewhere in London and already on a quart of an LSD tab after already having a heavy night out. A person who I did not know was trying to calm me down from a panic attack. ‘It’s all in the mind. Just relax and let go.’ But my mind was already wasted and paranoia and fear were starting to take over.

The walls of the flat were starting to merge and fold and the strange man’s face was warping in and out. I could handle most drugs but LSD always lifted a lid on my worst fears and my entire past and all its troubles would rush at me in one massive panic attack. The stranger wasn’t too sure what to do with me so made his excuses and left. I tried to stand up while the rooms and reality would bend and curve with dark emotions of paranoia and fear appearing as faces or malevolent beings. I stood up and attempted to go outside forgetting that we were in a high-rise tenement in South London. A fear of dying rose in me and I walked back inside and grabbed the phone. I called for help unsure of who I was calling and then made my way down the stairs. I could barely find the railing as I walked down and tightly clung to the wall. As I got to the bottom and the ambulance arrived I was promptly strapped in and took to hospital.

Or enter a custom amount